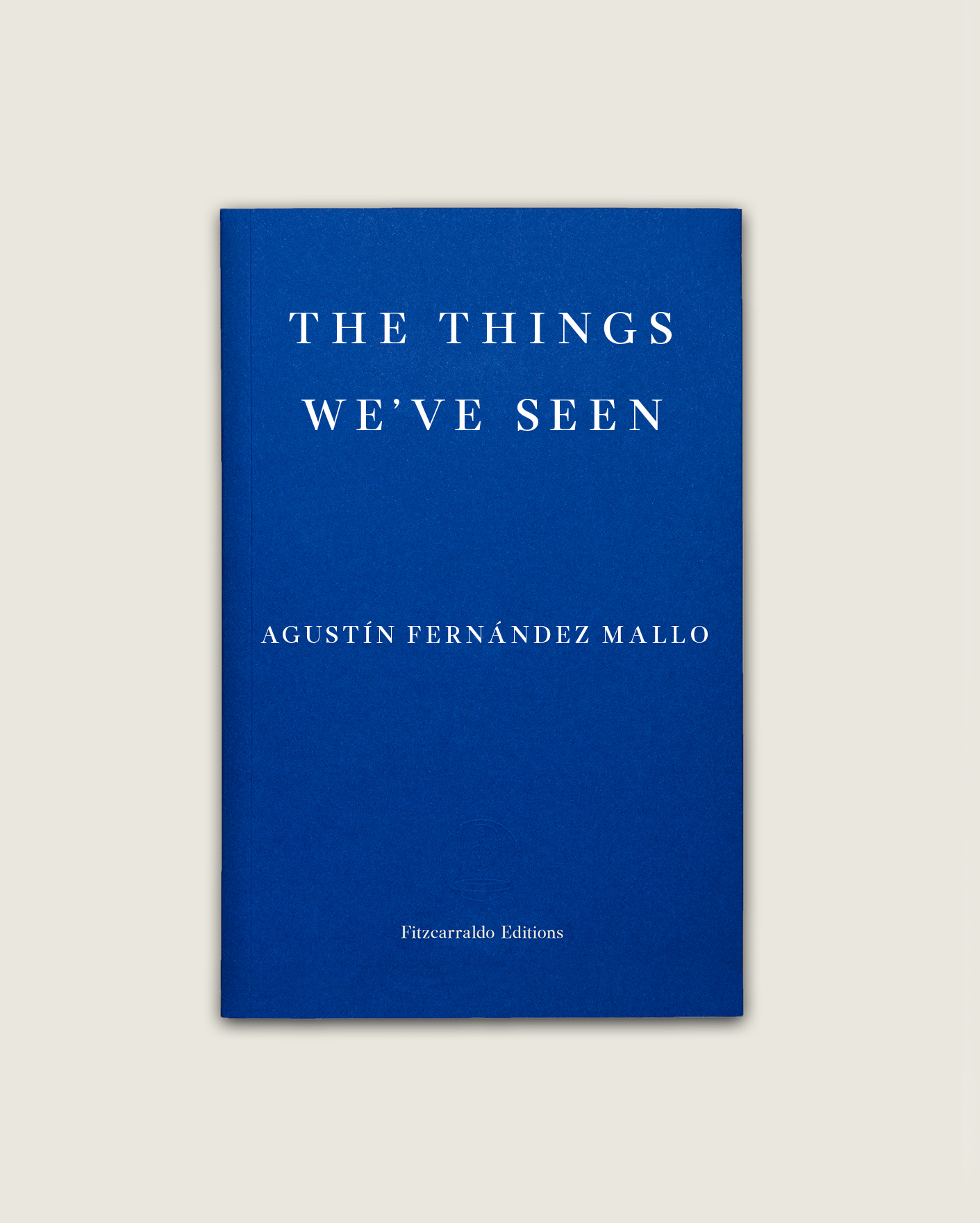 There’s so much we take for granted. On the morning of 15 September 2014, as I sat down to write after breakfast, the noise from the road works out in the street made me forget what I was writing about, and something I’d seen on television the previous day came to mind instead: a news item about the fact that one tenth of the earth’s surface has been constantly on fire, through no fault of human beings, for more than two hundred years. A look at a dynamic map of all the fires currently raging on the planet would reveal a multitude of these expanding red zones being carried forth by surface winds, in Africa especially, the continent referred to by experts in the field as the Heart of the Inferno. I found it startling to consider that our human modernity had developed side by side with this incandescent presence.

Some years ago, a musician friend told me about a long stint he’d once spent in an African jungle. Wanting to make recordings of instances of silence in nature, he had travelled to Lake Tanganyika in Tanzania, the second largest and second deepest lake on the planet. ‘So deep,’ he said, ‘that there’s no oxygen in the waters at the very bottom. They’re fossil waters.’ A helicopter had dropped him off in a clearing in the surrounding jungle with nothing but a tent, a change of clothes and some survival snacks, plus the necessary gamut of recording equipment, all manner of tapes and ambient microphones. He saw no fires burning, or if he did, he didn’t mention them to me, but he did say that, after a month and more of wandering those jungles, what struck him most was the utter absence of silence. The way in which the sounds of the natural world got inside his head day and night was something he recounted with genuine unease, and not because the sounds were strident or clashing in any way, but because of their unerring persistence. In the following months, during trips he sought to undertake as consecutively as possible, the same experience played out in the jungles of Brazil, the forests of Alaska and at a polar station a long way south of Patagonia, leading him to the conclusion that silence does not in fact exist in nature; rather it’s a fantasy fabricated by our culture, a concept we’ve simply dreamed up. And this was something my friend couldn’t understand. Or, he understood it, but he refused to accept it. The last I heard, his search for a piece of silence on Earth was still ongoing.

On that September morning, these and other thoughts were interrupted when I got an email containing the first mention I’d ever come across of San Simón, an island situated in the Vigo estuary in Galicia. The sender was someone who went by the name Rómulo, and I was being invited to take part in the third instalment of a programme called Net-Thinking, the aim of which, from what I understood, was to reflect on digital networks by bringing together both communications professionals and artists who, like me, sometimes use the internet as a space, and a tool, in our work. I had to read the message a couple of times before I remembered where I’d met Rómulo: at the launch of a mutual friend’s book, at which we’d exchanged only a few words. The people participating in the programme, the email explained, would stay in a hotel on the island – attached images showed some fairly smart facilities – and there was mention too of another participant, Julián Hernández, whom I knew both in his capacity as a member of the punk band Siniestro Total and through his literary involvements. Rómulo wanted the two of us to take part in a panel discussion. I wasn’t sure at first, but what finally won me over was mention of something that struck me as unusual: the idea was for there to be no audience present, only people watching a live stream that was due to be broadcast on various online platforms. In previous years these live streams had apparently attracted large viewerships, in Spain and Latin America especially. I was at the end of a period of intense work, during which I had barely left Mallorca; a few days on a different island, I said to myself, might do me some good.

A few hours later I realized I had in fact heard of San Simón before; it was a mystery how I’d managed to forget. In 1995, the journalists Clara María de Saá, Antonio Caeiro and Juan A. González had made a documentary called Aillados, which is Galician for Isolated, along with an accompanying book, both concerned with the years in which this collection of craggy rocks, no bigger than three football stadiums laid end to end, had served as a prison camp, with inmates drawn particularly from people in Pontevedra province who’d opposed the coup that precipitated the Spanish Civil War. I still owned the book; in fact, it had travelled with me from my native La Coruña to Mallorca, accompanying me every time I’d moved house – at least five times – since 1996. The house I now live in is organized in such a way that I can see all of my books at a glance. I keep none in boxes, none stowed away in wardrobes or back rooms, but there are so many of them now – two bookcases, each holding more than three thousand volumes – that it still took a while to lay my hands on it. Remarkably, it hadn’t fallen to pieces, and there were only one or two damp stains on it. I flicked through its collection of photographs and survivor testimonies. San Simón was described variously as a place of severe hunger, where people were routinely tortured or lined up against walls and shot, and as actually being easier on inmates than other penal institutions of the day. I went back to Rómulo’s email. The island is currently run by a foundation named Island of Thought. It had a ring to it. Island of Thought vs. Island of Repression, I said to myself. With that, the idea of fifteen people getting together to talk about the opposite of isolation – social networks – struck me as more suggestive still. Fifteen people transmitting ideas across the world from a place of isolation. I went on Google Earth and took a look at the island. It has an unusual shape, like two balls, one large and one small, joined by what in the images appeared to be a bridge spanning a rocky formation covered in green algae. On further inspection, I was reminded of the ground plan of Roma-Fiumicino airport. A connection that filled me with satisfaction, since the full name of Roma-Fiumicino is the Intercontinental Leonardo da Vinci Airport, which in some way bestowed upon the island a Renaissance air. Frankly, I went to bed that night excited about the trip. As always, I fell asleep attempting to conjure four white dots behind my eyelids, four dots that were once upon a time a permanent presence, but that at some point in my life vanished and never came back.

In The Things We’ve Seen, his most ambitious and accomplished novel to date, Agustín Fernández Mallo captures the strangeness and interconnectedness of human existence in the twenty-first century. A writer travels to the small uninhabited island of San Simón, used as a Franquist concentration camp during the Spanish Civil War, and witnesses events which impel him on a wild goose chase across several continents. In Miami, an ageing Kurt Montana, the fourth astronaut who secretly accompanied Neil Armstrong and co. to the moon, revisits the important chapters in his life, from serving in the Vietnam War to his memory of seeing earth from space. In Normandy, a woman embarks on a walking tour of the D-Day beaches with the goal of re-enacting, step by step, another trip taken years before. Described as the novel David Lynch and W. G. Sebald might have written had they joined forces to explore the B-side of reality, The Things We’ve Seen is a mind-bending novel for our disjointed times.

‘Fernández Mallo, the de facto leading light of an avant-garde literary movement known in Spain as the Nocilla Generation (so-called for the author’s own Nocilla Trilogy, 2015–19), writes here in a manner that variously recalls, references, evokes and invokes the writ- ings, aesthetics and thinking of W.G. Sebald, Carl Hiaasen, Louis-Ferdinand Céline, Georges Perec, Octavio Paz, Ben Lerner, Jeffrey Eugenides, Jorge Luis Borges, Edward Hopper, Giorgio De Chirico and many others, and yet that remains entirely his own in its final assembly and presentation.’
— David Terrien, ArtReview

‘There are certain writers whose work you turn to knowing you’ll find extraordinary things there. Borges is one of them, Bolaño another. Agustín Fernández Mallo has become one, too. This novel, which ranges across the world and beyond it, is hugely ambitious in scope. It’s a weird, recursive, paranoiac, funny, menacing and thrilling book.’
— Chris Power, author of A Lonely Man

‘Charmingly voracious and guided by fanatical precision and wit, Mallo ties the loose threads of the world together into intricate, charismatic knots. This is the expansive, omnivorous sort of novel that threatens to show you every thought you’ve ever had in a new and effervescent light, along with so many others you couldn’t have dreamed.’
— Alexandra Kleeman, author of Intimations

‘Some great works create worlds from which to look back at ourselves and recalibrate; The Things We’ve Seen takes the world as it is and plays it back through renewed laws of physics. Rarely has a novel left me with such new eyes, an X-ray view of the present.’
— DBC Pierre, author of Meanwhile in Dopamine City

‘The most original and powerful author of his generation in Spain.’
— Mathias Enard, author of Compass

‘The Things We’ve Seen confirms Fernández Mallo as one of the best writers in Spanish, with an absolutely unique style and fictional world.’
— Jorge Carrión, New York Times in Spanish

‘A strange and original sensibility at work – one that combines a deep commitment to the possibilities of art with a gonzo spirit and a complete absence of pretention.’
— Christopher Beha, Harper’s

Agustín Fernández Mallo was born in La Coruña in 1967, and is a qualified physicist. In 2000 he formulated a self-termed theory of ‘post-poetry’ which explores connections between art and science. His Nocilla Trilogy, published between 2006 and 2009, brought about an important shift in contemporary Spanish writing and paved the way for the birth of a new generation of authors, known as the ‘Nocilla Generation’. His essay Postpoesía, hacia un nuevo paradigma was shortlisted for the Anagrama Essay Prize in 2009. In 2018 his long essay Teoría de la basura (cultura, apropriacionismo y complejidad) was published by Galaxia Gutenberg, and in the same year his latest novel, Trilogía de la guerra (forthcoming from Fitzcarraldo Editions in 2021 as The Things We’ve Seen), won the Biblioteca Breve Prize.

Thomas Bunstead was born in London in 1982 and currently lives in west Wales. He has translated some of the leading Spanish-language writers working today, including Maria Gainza, Juan José Millás and Enrique Vila-Matas, and his own writing has appeared in publications such as the Brixton Review of Books, LitHub and the Paris Review.