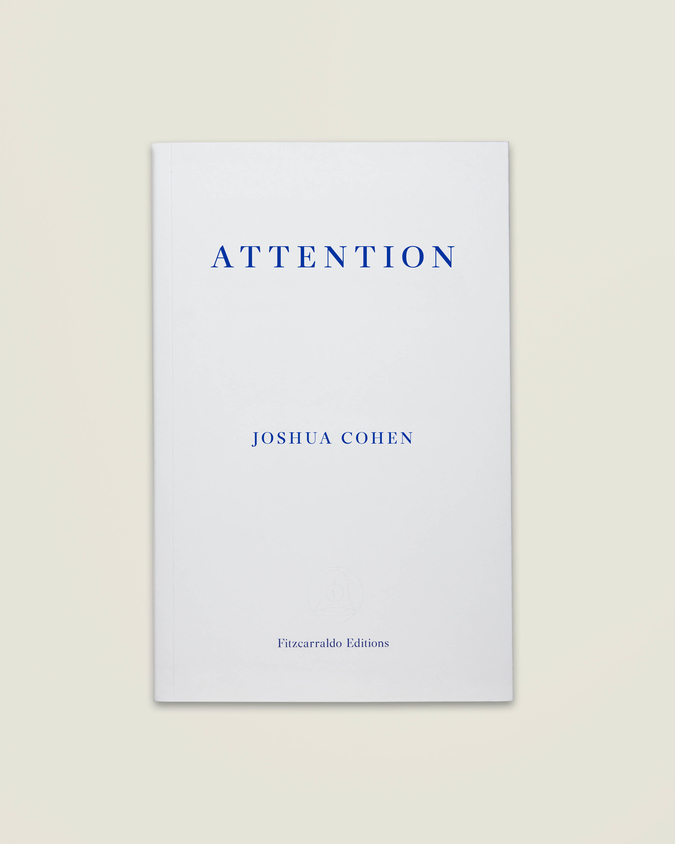 Attention: Dispatches from a Land of Distraction

If anything distinguishes my generation of American writers, it’s that everyone in my generation became a writer, simply through the act of going online. More words have been written, more words have been read, by my generation than by any other generation in human history. I have to say, as a person who’d always planned on becoming a novelist, as a person who’d always planned on supporting the writing of novels through the writing of nonfiction, I found this daunting. The amount of information and the speed of its dissemination overwhelmed. I’m guessing this was the experience of most Americans born within reach of a midsized untangled extension cord from the year 1980—most Americans who’d grown up with books, only to exchange them for millennial adulthood and screens.

This ever-increasing amount of information coming at us at this ever-increasing speed rendered us unable to adequately attend to our own divided presences, let alone to a world that, though it wasn’t united, was suddenly “global.” Terrorism in Istanbul, hostages in Afghanistan, shark attacks, lethal mold, a sex scandal involving a missing congressional intern, the Giants v. the Broncos (to mention just a few of the “headlines” of 9/10/2001)—we were utterly incapable of absorbing what was happening. Rather, we were only capable of reacting to it: We scrolled through the plenitude, and clicked “like,” and clicked “dislike,” and generally ignored anything we weren’t able to assimilate efficiently. The dangers of our impatience were obvious: no depth. But considerably less obvious were the dangers involved with a mass culture’s rupture into myriad subcultures. Today, our sense of selfhood is undergoing a similar fragmentation. We’re all becoming too disparate, too dissociated—searching for porn one moment, searching for genocide the next—leaving behind stray data that cohere only in the mnemotech of our surveillance.

I began writing nonfiction in the wake of 9/11—and was published in print, in hard copy, by newspapers and magazines that would go on to cut pages, wages, and staff, if they didn’t fold altogether. Meanwhile, online was busy revising responsibility for the attacks: Bush II ordered them, Cheney let them happen, the American Deep State colluded with the Israelis, the Israelis colluded with the Saudis. I remember enduring explanations about how it was absolutely unthinkable that an explosion of jet fuel would be able to melt that grade and tonnage of steel so quickly and completely as to cause complete collapse. Ergo, the destruction of the WTC had to be a “controlled demolition.” Ergo, the destruction of the WTC had to be “an inside job.” Here, at the start of my nonfiction career, was the first time I encountered this phenomenon—namely, the violence being done to facticity.

I live in a land where the natives don’t have to be native and the foreigners don’t have to be foreign; a land where everyone’s always changing their addresses and switching employers, trading in their old names for new names, and altering their sexual preferences, genders, and fortunes; a land whose peoples have no mutual history, or not much; a land whose peoples have no mutual culture, or not much; a land that lacks any common religious or ethnic or racial identity, along with all reliable markers of education and class, and even a unifying language and consistent ethical and moral principles.

This is where you live too, if you also live online: a land that feels virtual, because everything in it has been reimagined to distraction.

In its strictest sense, to be distracted means to be perplexed, confused, bewildered; a distracted person is out of touch with the person they used to be; a person “beside themselves,” who has to be reminded; a person drawn asunder, pushed away, pulled apart, turned aside; a person “depersonalized,” who’s lost their grip, their footing, their mind.

Meanwhile, when applied to the crowd, the epithet is declinist: It describes a state that cannot hold; a state diverted.

I considered listing some statistics regarding how many Americans claim they’re distracted, but while un- dertaking that research—which I only did because I could do it online—I came into contact not only with how many daily computer users claim they’re distracted, but also with how many American women aged sixty-five and older, and how many American children who attend public school and have no siblings and reside in nonur- ban areas, claim to be distracted on weekdays v. weekend nights. I was in the midst of compiling all these numbers into a single comprehensive number, but I must’ve gotten sidetracked, and, anyway, that final sum should be, to quote our Founders, “self-evident”: It’s everyone. It’s 100 percent. And even that figure feels too low by half.

Suffice to say, if you read at the pace of most Americans, which is approximately two hundred words per minute, then you’ve been reading for approximately six minutes by now, though—if you’re like most Americans in another respect—there’s also a roughly 50 percent chance you’ve already taken one break to check your email, and a roughly 75 percent chance you’ve taken two breaks if you’ve been reading on your phone.

But though we might experience distraction as a shuttling, the shuttling compounds. The ailment tends to multiply itself, to mirror, echo, spin off, and sequelize itself, until the best any of us can do is just acknowledge it: We’re spiraling.

Especially because what you should be doing is trying to step back. Not to retreat, but to gain another vantage. Stepping back is never a retreat, if you pursue a problem to its origins. We’ll only recover if we can find out just how and why this problem of distraction—this dim word, this diffuse abstraction—came to so blight us and unravel our brains.

With Attention, Joshua Cohen returns with his first collection of nonfiction, the culmination of two decades of writing and thought about life in the digital age. In essays, memoir, criticism, diary entries, and letters—many appearing here for the first time—Cohen covers the full depth and breadth of modern life: politics, literature, art, music, travel, the media, and psychology, and subjects as diverse as Google, Donald Trump, Bernie Sanders, fictional animals, Gustav Mahler, Aretha Franklin, John Zorn, landscape photography, fake Caravaggios, Wikipedia, Gertrude Stein, Edward Snowden, Jonathan Franzen, Olympic women’s fencing, Atlantic City casinos, the closing of the Ringling Bros. circus, and Azerbaijan. Cohen directs his sharp gaze at home and abroad, calling upon his extraordinary erudition and unrivaled ability to draw connections between seemingly unlike things to show us how to live without fear in a world overflowing with information. At this crucial juncture in history, Attention is a guide for the perplexed—a handbook for anyone hoping to bring the wisdom of the past into the culture of the future.

‘Joshua Cohen has a complex and capacious consciousness.’
— Harold Bloom

‘Cohen, one of our crucial young novelists, has made the non-fiction novel of our moment, formed of a constellation of investigations and inklings. No one’s done such a thing so well since George Trow or Joan Didion or Norman Mailer, if ever. It’s chasteningly brilliant, and the kind of chastening we unfortunately need.’
— Jonathan Lethem, author of The Fortress of Solitude

‘Joshua Cohen is one of my favorite nonfiction writers. This book is a cause for celebration.’
— Elif Batuman, author of The Idiot

‘First-rate … Whip-sharp … Cohen here flaunts a next-level virtuosity across countless fields of expertise … [and] tackles the meta-problem of attention with the fervour of a man who knows the solution. ... [He] is a phenomenal thinker whatever the theme: granular, acrobatic, startling.’
— Benjamin Evans, the Guardian

‘... cause for celebration and close study. [Cohen] is experimenting with the essay form much more, and more cleverly, than any major American writer today.’
— Zachary Fine, the Wall Street Journal

‘I enjoy his electric prose style … when it comes to making sense of our times with verve and imagination, few authors are more rewarding of our attention.’
— Max Liu, the Financial Times

‘Joshua Cohen – novelist, journalist, critic; prodigy, polyglot, polymath – has one of the most interesting minds in circulation. ...  a young elegist for an old idea: ideas. He is a man profoundly out of step with the world in which he finds himself. Which is the only respectable place for a writer to be.’
— New York Times

‘[W]hat thrilled me was the imaginative and transfiguring attention Cohen pays to everything he touches. ... There’s so much pleasure in Cohen’s sentences.’
— James Wood, New Yorker

‘The subject matter runs the gamut of his formidable erudition and searchable interests — Israel, music, literature, Azerbaijan, US politics — and many pieces read like brief, topical histories stuffed with but not strained by tangents, facts, anecdotes, and maxims. … Cohen’s prose is packed with high-octane witticisms … but even those readers put off by his prankster flair are likely to concede that its cumulative effect both elevates and elegizes the act of writing in the internet age.’
— Jessi Jezewska Stevens, LA Review of Books

‘Dazzling in its scope ... If curiosity is a writer’s greatest innate gift, Joshua Cohen may be America’s greatest living writer.’
—The Washington Post

‘A grand gathering across place and time, cohered around this notion of attention—who pays it, what it costs ... [Cohen is] a dogged and astute chronicler and critic of the internet and the culture of distraction it engenders. But Attention also pays attention, a journalist’s or even a muckraker’s attention, to the real world. To the depredations of post-crash politics and economics, the resurrection of irony and the death of facts.’
—Bookforum

‘Joshua Cohen is a blacksmith who heats, hammers and molds the language to sharpest, most precise points. Not for the sake of craft, but to tell a troubled story about troubled life in the twenty-first century. This is a dazzling and poignant book.’
— Rachel Kushner, author of The Flamethrowers

‘Cohen is an extraordinary prose stylist, surely one of the most prodigious in American fiction today.’
— James Wood, New Yorker

‘Funny, smart, and perfectly addictive, Moving Kings  a novel of wonderful scope. It shows Cohen at the top of his powers and is bound to bring him many new readers, hot for a fresh understanding of America.’
— Andrew O’Hagan, author of The Illuminations

‘Joshua Cohen’s Moving Kings is a lit fuse, a force let loose, a creeping flame heading for demolition, and Cohen himself is a fierce polyknower in command of the workings of the moving parts of much of the human predicament. A master of argot and wit, he writes the language of men in a staccato yet keening idiom of his own invention. And though it is set in a grungy New York, call this the first Israeli combat novel ever dared by an American writer.’
— Cynthia Ozick, author of Foreign Bodies

Praise for Book of Numbers

‘More impressive than all but a few novels published so far this decade. ... Cohen, all of thirty-four, emerges as a major American writer.’
— Dwight Garner, New York Times

Joshua Cohen was born in 1980 in Atlantic City. His books include the novels Moving Kings, Book of Numbers, Witz, A Heaven of Others, and Cadenza for the Schneidermann Violin Concerto; the short fiction collection Four New Messages, and the non-fiction collection Attention: Dispatches from a Land of Distraction. Called ‘a major American writer’ by the New York Times, ‘maybe America’s greatest living writer’ by the Washington Post, and ‘an extraordinary prose stylist, surely one of the most prodigious at work in American fiction today’ by the New Yorker, Cohen was awarded Israel’s 2013 Matanel Prize for Jewish Writers, and in 2017 was named one of Granta’s Best Young American Novelists. He lives in New York City.