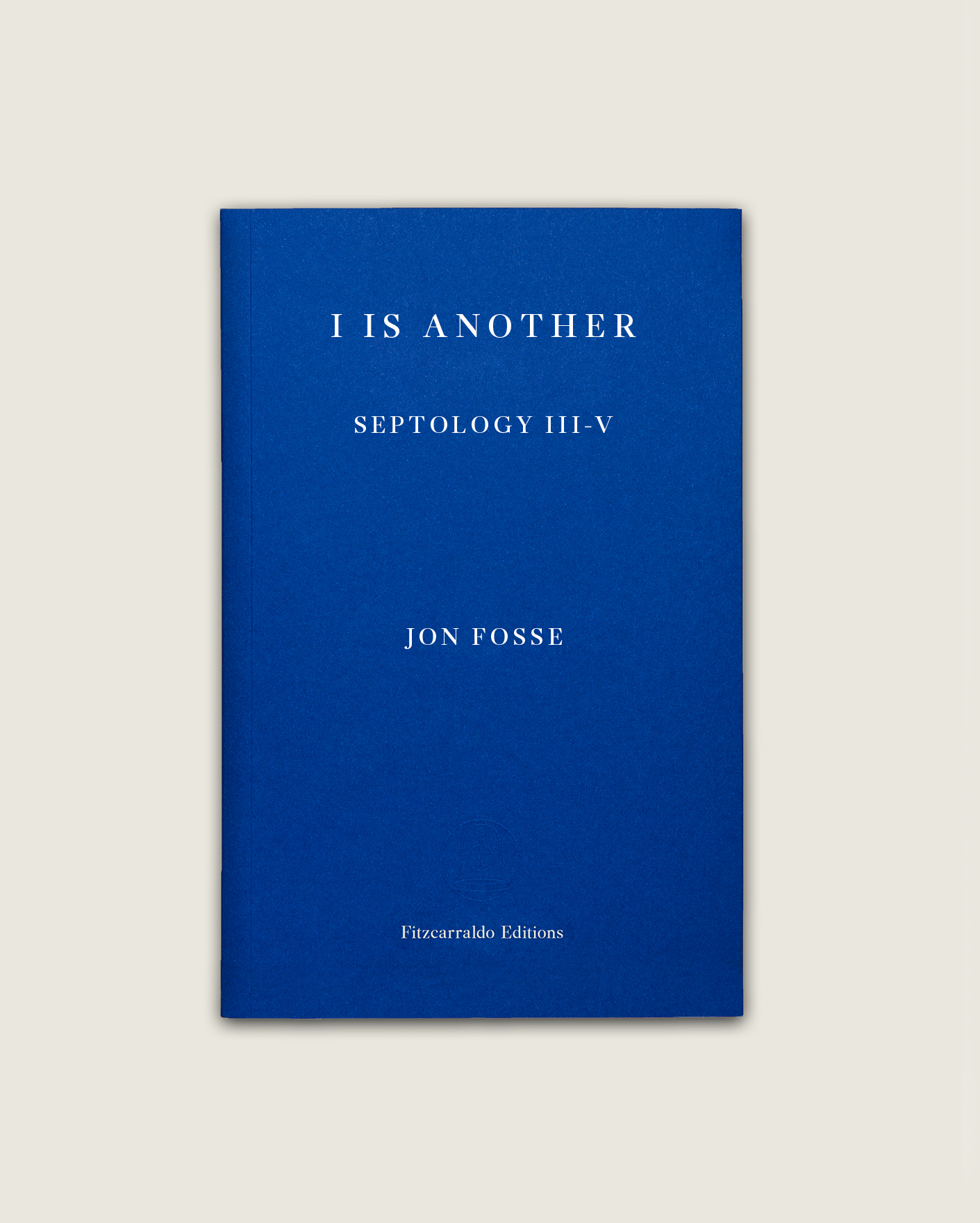 I is Another: Septology III-V

And I see myself standing and looking at the picture with the two lines, a purple line and a brown line, that cross in the middle and I think that it’s cold in the main room, and that it’s too early to get up, it doesn’t matter what time it is, so why did I get up then? I think and I turn off the light in the main room and I go back to the little bedroom and I turn off the light there and I lie back down in bed and I tuck the duvet tight around me and Bragi lies down against me and I think well I got a little sleep last night, even if not that much, and today is Wednesday and it’s still early in the morning, or maybe it’s still nighttime? I think and it was so cold in the main room that I didn’t want to get up, I think and I pet Bragi, rub his back, and then I look into the darkness and I see Asle sitting on the swing outside his front door and he’s not swinging, he’s just sitting there, and he’s thinking he can’t figure out anything to do and he swings carefully, slowly back and forth a little and then Mother comes out onto the porch and she’s angry and Asle doesn’t know why she’s so angry

What’s the matter, he says

Get over here, Mother says

There you are, she says

and he doesn’t understand why Mother’s voice is so angry, what’s wrong with her? what has he done now to make her so mad at him? he thinks

Look at this, Mother says

and she opens her hand and Asle sees three one-krone coins lying in the palm of Mother’s hand and she stands there holding out her hand with the three krone coins in it and she doesn’t say anything and Asle thinks how did Mother find the three kroner? and he’d meant to hide them somewhere clever, yes, he’d meant to put them under one of the flagstones outside the front door but then he forgot, it just disappeared from his mind and now Mother is standing here holding the three coins out to him, and how did she find them anyway? Asle thinks, and then he thinks of course she found them in his pocket because he forgot to take them out of his trousers and hide them

Where did you get these? Mother says

Where did you get these coins? Mother says

Well, answer me, she says

Don’t just stand there with your mouth hanging open, she says

and he has to say something, anything, Asle thinks

I found them, he says

You found them? Mother says

Where did you find them? she says

Answer me, tell me where you found them, she says

On the road, he says

On the road you say, Mother says

Yes, on the road, Asle says

Where exactly, she says

Outside The Bakery, he says

You found them outside The Bakery? Mother says

and she says does he expect her to believe that, that he found them, outside The Bakery

You stole them, Mother says

I didn’t steal anything, Asle says

Yes you did, you stole them, she says

I did not, he says

You did, she says

Asle is an ageing painter and widower who lives alone on the southwest coast of Norway. His only friends are his neighbour, Åsleik, a traditional fisherman-farmer, and Beyer, a gallerist who lives in the city. There, in Bjørgvin, lives another Asle, also a painter but lonely and consumed by alcohol. Asle and Asle are doppelgängers – two versions of the same person, two versions of the same life, both grappling with existential questions.
In this second instalment of Jon Fosse’s Septology, ‘a major work of Scandinavian fiction’ (Hari Kunzru), the two Asles meet for the first time in their youth. They look strangely alike, dress identically, and both want to be painters. At art school in Bjørgvin, Asle meets and falls in love with his future wife, Ales. Written in melodious and hypnotic ‘slow prose’, I is Another: Septology III-V is an exquisite metaphysical novel about love, art, God, friendship, and the passage of time.

‘The prose may be slow and meditative, but each thought on the page billiards another, and in a graceful translation from Damion Searls, the book was surprisingly engaging, its impression lasting. [...]The first book, good though it was, now starts to feel like an undercoat over which this second instalment provides more texture and nuance. There is a sense of something gathering here, the culmination of a life. The stream of consciousness has matured into something slower, deeper and more winding.’
— Rónán Hession, Review 31

‘Fosse’s fusing of the commonplace and the existential, together with his dramatic forays into the past, make for a relentlessly consuming work: already Septology feels momentous.’
— Catherine Taylor, Guardian

‘The reader of I is Another is both on the riverbank and inthe water being carried forward, and around, by the great, shaping, and completely engrossing, flow of Fosse’s words. It’s a doubleness of view that is reflected in the characters, named Asle, who are both one and other, and through which we can see and feel the world, and ourselves, more clearly.’
— David Hayden, author of Darker with the Lights On

Praise for The Other Name: Septology I-II

‘Fosse has written a strange mystical moebius strip of a novel, in which an artist struggles with faith and loneliness, and watches himself, or versions of himself, fall away into the lower depths. The social world seems distant and foggy in this profound, existential narrative, which is only the first part of what promises to be a major work of Scandinavian fiction.’
— Hari Kunzru, author of White Tears

‘There is, in this book’s rhythmic accumulation of words, something incantatory and self-annihilating – something that feels almost holy.’
— Sam Sacks, Wall Street Journal

‘Septology is on its way to becoming some of Fosse’s most meaningful art, his singular picture finally dislodged.’
— Spencer Ruchti, Music and Literature

‘The Other Name trembles with the beauty, doubt, and gnostic weariness of great religious fiction. In Fosse’s hands, God is a difficult, pungent, overwhelmingly aesthetic force, ‘the invisible inside the visible’.
— Dustin Illingworth, The Nation

Jon Fosse was born in 1959 on the west coast of Norway and is the recipient of countless prestigious prizes, both in his native Norway and abroad. Since his 1983 fiction debut, Raudt, svart [Red, Black], Fosse has written prose, poetry, essays, short stories, children’s books, and over forty plays, with more than a thousand productions performed and translations into fifty languages. The Other Name is the first volume in Septology, his latest prose work, will be published in three volumes by Fitzcarraldo Editions.

Damion Searls is an award-winning translator from German, Norwegian, French and Dutch and a writer in English. He has translated five books and a libretto by Jon Fosse – Melancholy (co-translated with Grethe Kvernes), Aliss at the Fire, Morning and Evening (novel and libretto), Scenes from a Childhood and The Other Name, the first volume of Septology, which was longlisted for the International Booker Prize – and books by many other classic modern writers.