Due to changes in EU VAT regulations in place from 1 July 2021, we are pausing all new orders from our website to EU countries. Orders predating 30 June 2021 will be fulfilled. Any new orders placed in error will be refunded in full immediately. 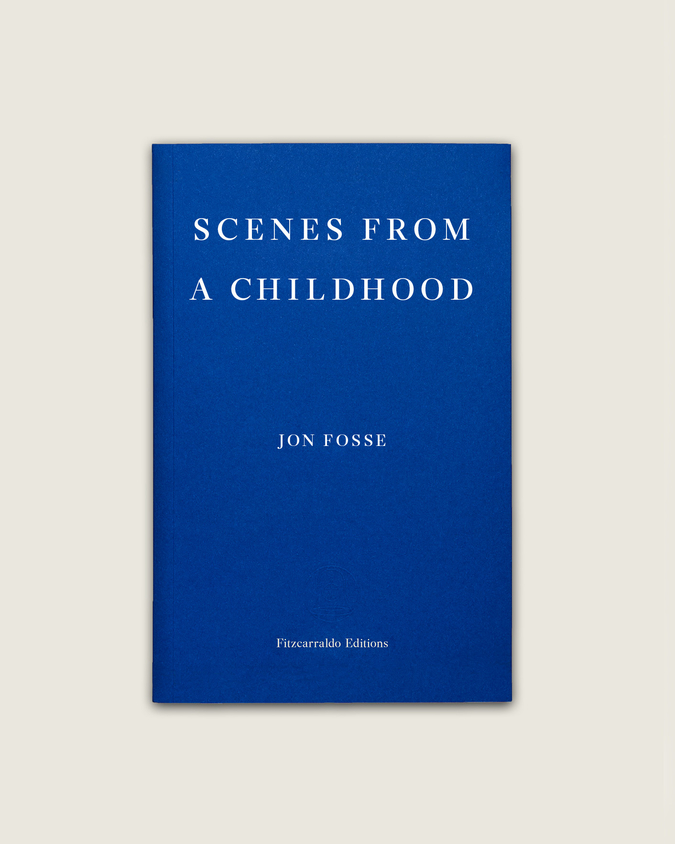 Scenes from a Childhood

It’s maybe four o’clock when Trygve and I go out to the old barn. My grandfather built this barn but now it’s fall- ing apart, the unpainted planks in the walls are rotting away, there are holes in the wall you can see through in some places and a couple of roof tiles lying in the net- tles, three more sticking out of a puddle of mud. A rusty hook is hanging from the door-frame. The door is hang- ing from the door-frame too, attached with hay-baling cord, swinging crookedly. A warm summer day, after- noon. Trygve and I sit on a large round stone a few yards from the barn. There are plastic bags under our legs with our lunches inside, slices of bread with brown cheese, we each have a soft drink. It’s hot. We’re both sweating. Mosquitoes are buzzing round our heads.

I JUST CAN’T GET THE GUITAR TUNED

I just can’t get the guitar tuned and the dance is about to start. There’s already a big crowd in the room, most of them people involved with the event and their friends and girlfriends, but still a lot of people, when I look up from the shelter of the long hair hanging down over my eyes I see them moving around the room. I’m bent over my guitar, turning and turning a tuning knob, I turn it all the way down and the string almost dangles off the fretboard, all forlorn, and then I strum on it while I turn the knob up, up, I hear the tone slide higher, I strum on two strings, now is this right? no, it always sounds a little off, doesn’t it, and I turn it more, I turn and turn, up and down, I turn it and turn it and the drummer is pound- ing for all he’s worth and hitting the cymbals and the bassist is thumping too and the other guy on guitar is standing there strumming chord after chord and I just can’t get this damn guitar in tune. I turn the knob more, and the string breaks. I push my hair back and shout that the string broke. The others just keep the noise going. I unplug the guitar and go backstage, I have spare strings in my guitar case. I find a new third string. I change the string, turn the knob until the string is on. I walk back onstage. I plug the guitar in again and start tuning it. I can’t hear anything. I shout for the others to stop play- ing. They stop. I try to tune the guitar. I can’t do it. I ask the other guitarist to give me the note, he plays a G on his third string. I turn the knob.

And now it starts to sound right.

Almost there, he says. Maybe a little more. I turn it a little higher and strum.

I turn it down slightly and strum.

Damn it, he says. Take it all the way down, we’ll try it

I turn the knob all the way down. He plays the open

third string on his guitar. I start to turn the knob up. I hear it getting closer. It’s getting closer. I see the other guitarist nod. I turn it a little more. And now it sounds right, almost perfect.

Almost, the other guitarist says.

Careful now, the other guitarist says.

I turn it a little bit more. And I hear the string break. Fuck, I say.

Go get another one, the other guitarist says.

I don’t think I have one, he says.

He digs around in his guitar case some more. He gets up and shakes his head.

Nope, he says. No G string.

Then I guess I’ll have to play with five strings, I say. That’ll probably work, he says.

People are already here, I say.

One day Father yells at him and he goes out to the wood- shed, he gets the biggest axe, he carries it into the living room and puts it down next to his father’s chair and asks his father to kill him. As one might expect, this only makes his father angrier.

IT HAS STOPPED SNOWING

It has stopped snowing. Geir and Kjell are out in the new snow but they’re not going skiing, no they’re busy with their snow shovels, pushing the snow around and beating it down flat and hard. I’m standing at my win- dow spying on what they’re doing out there. I ask my mother if I can go outside and she says OK. I bundle up, gloves and everything, and go outside. I run over to Geir and Kjell and ask them what they’re doing and they say they’re going to play car and make streets and a tun- nel and everything in the snow. I run home and get two cars. I come back and Geir and Kjell have finished with the snow shovels and they’ve already started working on the construction. And then Geir and Kjell and I build a tunnel, and a garage, and a house. This is going to be great. Geir loads snow onto the truck with an excavator. Kjell drives the snow in the truck, then dumps it out. I build a road. We are working and building. We don’t know what will happen next but we crawl around in the snow, humming and whistling, driving and dumping. Snow is falling steadily on us, light and white, so that the road has to be cleared again and again. We work and build and clear the road. Time passes, but we don’t notice. We plough the road and gravel it with the light- est new snow. We don’t notice that some slightly bigger boys, boys we barely know even though they live only a few houses away, have come walking up to us through the yard. The boys don’t live far away but we don’t know them. They stand and look at us. They ask what we’re doing, and we say we’re playing car. They ask if they can play too, and we hand them our cars, our excava- tor. Then we stand and watch the other boys play. They yell louder and push the wheels down into the road, they            laugh and shout.

You can’t fucking drive on a road like this, they say. They have to repair the road, it’s a bad road, Geir

You can’t fucking repair a road like this, they say. These road workers are useless, they say. Making such a crap road, they say.

I want my car back, Kjell says.

Your crappy car, they say.

That car’s useless too, they say.

It’s all a bunch of shit, they say.

What’s that? they say.

You can’t park there, they say.

Co-funded by the Creative Europe Programme of the European Union

Scenes from a Childhood is the latest collection of stories by Jon Fosse, one of Norway’s most celebrated authors and playwrights, famed for the minimalist and unsettling quality of his writing. In the title work, a loosely autobiographical narrative covers infancy to awkward adolescence, unearthing the moments of childhood that linger longest in the imagination. In ‘And Then My Dog Will Come Back To Me’, a haunting and dream-like novella, a dispute between neighbours escalates to an inexorable climax. Taken from various sources, the texts gathered here together for the first time demonstrate that the short story is one of the recurrent modes of Fosse’s imagination, and occasions some of his greatest works.

‘The Beckett of the twenty-first century.’
— Le Monde

‘Jon Fosse is less well-known in America than some other Norwegian novelists, but revered in Norway – winner of every prize, a leading Nobel contender. I think of the four elder statesmen of Norwegian letters as a bit like the Beatles: Per Petterson is the solid, always dependable Ringo; Dag Solstad is John, the experimentalist, the ideas man; Karl Ove Knausgaard is Paul, the cute one; and Fosse is George, the quiet one, mystical, spiritual, probably the best craftsman of them all ... His writing is pure poetry.’
— Paris Review, from an essay by the translator

‘Fosse has been compared to Ibsen and to Beckett, and it is easy to see his work as Ibsen stripped down to its emotional essentials. But it is much more. For one thing, it has a fierce poetic simplicity.’
— New York Times

‘With its heavy silences and splintered dialogue, his work has reminded some of Beckett, others of Pinter.’
— Guardian

‘Fosse’s prose ... builds out of an ambiguity and sparseness and moves with a slow poetic intensity. ... The collection has all the hallmarks of Fosse’s signature brooding manner where lyrical precision is used to paint unmoored psyches. An accumulation of moments when our essential emotions come into conflict with experience, Scenes from a Childhood is a welcome – if overdue – introduction to a singular literary voice.’
— Tank

‘Fosse writes about the complexity and danger of the bleak Norwegian countryside as well as he writes about the passage of time through a life. In choosing to mostly focus on pieces about childhood, Searls has been able to show an impressive side to Fosse, because – in my experience at least – writing engaging prose about childhood trips up many otherwise competent writers. ... Fosse understands that a child’s mind is not merely the mind of an ignorant adult, it is a different form of consciousness entirely: more curious, more optimistic, less scared. ... There are portraits of great happiness, great pleasure and great joy in Scenes From A Childhood.’
— Berfrois

‘Fosse’s vignettes beautifully reclaim the revelations and deceptions of growing up, the punishments both arbitrary and well-earned, the lust for freedom expressed through the smallest transgressions and pettiest rebellions, the incompetence, the cluelessness, the joy and the pain, all of it twice-distilled in its clarity and intensity.’
— Asymptote

‘Fosse’s style – straightforward, unembellished, but ranging from the concisely spelled out to the more rambling stream-of-(troubled-)consciousness – is crisp and beautifully polished’
— Complete Review

‘Undoubtedly one of the world’s most important and versatile literary voices.’
— Irish Examiner

‘He has a surgeon’s ability to use the scalpel and to cut into the most prosaic, everyday happenings, to tear loose fragments from life, to place them under the microscope and examine them minutely, in order to present them afterward... sometimes so endlessly desolate, dark, and fearful that Kafka himself would have been frightened.’
— Aftenposten

Jon Fosse was born in 1959 on the west coast of Norway and is the recipient of countless prestigious prizes, both in his native Norway and abroad. Since his 1983 fiction debut, Raudt, svart [Red, Black], Fosse has written prose, poetry, essays, short stories, children’s books, and over forty plays, with more than a thousand productions performed and translations into fifty languages. The Other Name is the first volume in Septology, his latest prose work, will be published in three volumes by Fitzcarraldo Editions.